The City of London Corporation is known for providing local government services to the UK’s financial centre, the Square Mile. What’s less well known is the range of other services it provides for the capital, from the stewardship of open spaces and woodlands such as Hampstead Heath and Epping Forest to the management of the Port of London docks at Tilbury, the wholesales markets of Billingsgate, Smithfield and Spitalfields, and even the Heathrow Animal reception Centre.

These varied responsibilities result in a very diverse fleet to manage, as well as the necessary drivers. To enable this the City set up the Transport Coordinating Group (TCG) in 2005 with representatives from departments across the organisation who have transport responsibilities. The TCG is chaired by Jim Graham, Assistant Director of Cleansing, and meets every two months to discuss and resolve any transport related issues across the Corporation.

One of the actions the TCG identified early on is the implementation of the Ultra-Low Emission Zone (ULEZ) in April 2019 and the Mayors strategy to ban diesel’s in the future from City areas and London.

The City first started the Journey on FORS in 2007 when the accreditation first started after hearing about it at a conference. Started going to the practitioner meetings and registered to go for Bronze. “we knew then that FORS would help the City comply and set high standards.” 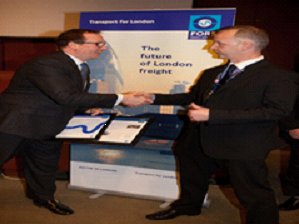 The first audit was carried out by the Metropolitan Police and it was a rigorous process that helped us make changes to the way our transport department operated, and this was for the better.

“This encouraged the City to make changes to the Transport department and get senior management support”. A great audit of our systems and processes in place.

Once the City received Bronze accreditation we knew the next steps were to go for Silver, this entailed attending practitioner’s courses, looking at the fuel performance tool and add our fuel/PCN, FPN’s onto the system and gather one years past history worth of data, this in turn helped the City understand and benchmark against other in our sector.

“Being part of FORS and LoCity enabled us to easily seek advice on best practice when developing The City of London’s strategy on future fuels to use.” – Quote by Vince Dignam Business Performance and Group Transport Manager.

The City have seen key benefits such as the practitioner’s qualification for transport staff, Driver CPC training, LoCity e-learning training and workshops. The other benefits have been incorporating the standards into the procurement process for our contractors to have the FORS accreditation.

The Main reasons for progressing through Silver and Gold was to make sure firstly all drivers were trained to a high standard and achieve an objective of complying with Work Related Road Risk and Vulnerable road users, this included safer vehicles and equipment on the vehicles to help achieve the City’s road danger reduction policy objectives.

We have used the performance data to track FPN’s and fuel usage along with the NOx, CO2 data for air quality and it will help the City see how improvements are made as we move into modal shift for the operation and how we can improve air quality, DURING 2016/17 THE City have seen a reduction in annual mileage of 11.25 % that has had a positive effect on carbon reduction and Nox also. Due to where we operate and exemptions we do not have a major problem with parking tickets/FPN’s so this part of the tool highlights that fact.

The City Have its own Occupational Health department and have had systems in place and declarations for Drivers Health Checks. Since being a member of FORS we have also introduced Driver Health check forms and track any changes for Health issues and refer staff to Occupational Health for advice and guidance. The introduction of Six monthly eye tests have been developed in line with the FORS standard, as part of this the City also pay for Drivers eye tests. Health and Safety have also launched an initiative on Mental Health awareness and support.

Work with the FTA, FORS and other organisations to investigate strategies to recruit drivers, at the City we identify staff that may want to drive LGV’s and the appraisal system identifies this, over the past two years the City have trained 5 members of staff to gain their LGV licence. Also worked with agencies who specialise in assisting Ex -army/military staff into civilian life who already have the skill sets to drive large goods vehicles. One other area we are looking at is apprenticeships to develop drivers and hoping to progress this over the next few years.

The City of London have a noise at work Policy and this is being added to the drivers handbook with regards to drivers when loading un-loading, in residential areas and out of hours work. In addition, as a specifier of contracts on the Cleansing and waste contract the City have imposed conditions in residential areas during the Hours 23:00 – 07:00am at specified locations. Have an anti- Idling policy that staff and contractors adhere to, this initiative has tool box talks as reminders throughout the year.

With regards to Modal shift the City of London are using the river for the transfer of waste and disposal from its transfer station in London that is managed by Cory, in addition to this via the Construction Logistics working group we are looking at how other material can be moved on the river and how consolidation would support this.

Vince Dignam and Sarah Maxwell responsible for transport at the City of London Corporation decided to join the LoCity working groups to see how this would help make decisions in the future. We have found that the LoCity working groups and conferences have helped tremendously by firstly talking to other transport operators who face the same challenges and working out what future technology will support our strategies. We knew early on in these programmes that this would help for planning in the future with all the legislative changes coming.

The LoCity case studies have helped and engagement with the manufacturers of the vehicles also has been invaluable. The ethos of the LoCity programme fits with the City’s vision, “prepare freight for implementation of the ULEZ”, “Improve air quality and deliver health benefits to Londoners”, “Support public and private fleets with upgrading to cleaner vehicles and alternative fuels”.

The City of London have supported this initiative and presented at various workshops and conferences to share experiences.

So far, the City have been involved in trialling various alternative fuelled vehicles from LPG vans, cars to the most recent 26 tonne Electra Refuse collection fully electric commercial vehicle that is on a Mercedes Econic chassis (Low entry High vision cab) and has a fully electric compaction body and bin lift mechanism.

The City have worked with their term contractors on special projects relating to different fuel typed vehicles such as on our Highways contract trial the fully electric 3.5 tonne Iveco tipper for the City contract as well as an electric lift on the mobile access lighting van vehicle with Riney. Trialling the fully electric mechanical sweepers from Johnston Bucher, City cat 20/20 and Addex electric sweeper.

The City have added some Nissan Env – 200 fully electric vans to the fleet and looking at other vehicles to add in the future. Looking at the Lord Mayors cars as well to see what electric cars will be suitable for that operation, trials to start in summer 2018.

“ LoCity – This is a chance for London to lead the way both in the UK and in Europe, and position itself as a pioneer for low emission and low carbon commercial vehicles.”

One of the other important factors is to raising awareness of the staff that drive for the City and as part of the FORS accreditation and training the City have set up the LoCity e-learning courses and LoCity driver training courses to be carried out by staff and term contractors. The Locity case studies and information and visits for infrastructure has proven very useful also. Part of the engagement plan has been to engage and encourage departments to test drive the different types of alternative fuelled vehicles which has led to departments purchasing Electric vans, Hybrid cars, electric quad and Golf style buggies. The City have also purchased a Mega electric tipper with power wash machine on for cleaning.

We have been working with manufacturers on the Direct vision standards and have low entry high vision vehicles on fleet and specify that our contractors operate this standard in the future as well.

The City are very proud to have the Gold FORS accreditation standard and to have been one of the first 12 companies to gain this and maintain the standard year on year since. The benefits are knowing that you are compliant with robust policies in place, keeping up to date with changes and FORS help with this process with Practitioner working days and specific working groups and workshops on initiatives that are developing. One other major benefit was to add into our supply chain the need to have FORS accreditation as this gives peace of mind that operators in the supply chain are working to one standard.