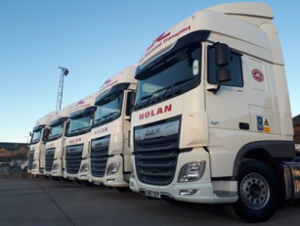 John Raymond Transport Limited is a long-established transport, distribution and warehousing company based at Bridgend in South Wales. General Manager; Geraint Davies explains how the FORS standard continues to drive best practice by encouraging and rewarding a positive behaviour and a culture of compliance, change and efficiency. FORS has enabled the company to reduce fuel burn and correlating emissions significantly by setting the standard and allowing the company to raise the bar incrementally year on year.

There has been a continued reduction in collision frequency, particularly in urban environments along with a reduction in PCN’s issued largely as a result of the FORS e- learning and driver CPC training.

John Raymond Transport Limited first heard of the FORS Standard through the industry press back in 2010, the company quickly set about joining the scheme as a means to promote best practice by taking a holistic approach to safety and compliance. The FORS Standard has enabled the company to continually strive for excellence as the standard evolves.

John Raymond Transport passed its initial Bronze audit in 2010 and was one of the first hauliers in Wales to achieve this, this was a catalyst for the company to evolve and grow with the standard. Geraint Davies was in the first cohort to complete the whole series of FORS workshops and become a FORS Practitioner; he also attended the refresher course and all e-learning modules.

Once the company had achieved the initial Bronze accreditation, the company took advantage of the various online tools, workshops, conferences, driver CPC training and e- learning.

The FORS Practitioner Workshops and the FORS conference continue to assist the company in developing and improving strategies and systems that reduce incident frequencies and fuel burn and to share best practice in reducing the risk to vulnerable road users by developing toolbox talks and promoting FORS e-learning. We have seen a further decrease in PCN’s issued; this is down to just 12 in total for the same period this year.

”There continues to be a reduction in low speed / urban incidents, this I believe is attributed to improved driver training, especially the SUD course”; Oliver Nolan, Director.

The company has a desire to retain, maintain and develop the FORS Gold standard as recognition of the hard work by the whole team in consistently raising the bar. The fleet renewal process actively considers vulnerable road user safety in vehicle specification by adding technologies such as side scan and nearside proximity warning systems and left turn warnings. We have recently taken delivery of 10 new DAF XF106 tractor units along with a further two Volvo Euro 6 vehicles. Our aim remains to encourage others to take advantage of the benefits that FORS can bring not only to logistics providers but to all road users. www.jrt.co.uk www.facebook.com/JohnRaymondTransportEwennyRoadIndustrialEstate/

*Please note: All published FORS Gold case studies have been submitted by the accredited company named above and transcribed verbatim