Martin Gibbons operates two concrete mixers on a franchise scheme for Tarmac. We deliver ready mixed concrete to construction sites at various locations.  Currently, we operate from Reading plant however, in the last year we have worked in central London from the Park Royal plant, Heathrow airside, and across the South Coast into Wales.  During this time we can see the demand to check FORS accreditation increasing.. FORS has helped me sustain the improvements I had already made in my business, and through its practitioner workshops help me fill in knowledge gaps. 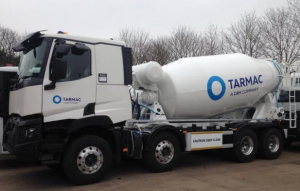 Tarmac approached its hauliers about FORS in 2013 and in January 2014 we achieved Bronze, and have sustained this since.  Without FORS we would probably not have completed the cycle safe CPC module.  I went for Silver in August 2017 and following on from that I went on to achieve Gold.  Through progression FORS has helped the company to be a more competent operator.

My commitment to FORS and the ensuring I deliver the required standards. After the initial audit we had to review some of the practices we used to ensure there was more detail, this was around driver training and collating information better.  Building on from this has been both challenging and rewarding.  The construction industry has tried to move itself forward to show better compliance, training and an ethos of better working, and FORS has certainly helped with that.  The support tools and reference material is second to none and even now I still find things to help me move on further.  This helped the company understand that there were things we could do better and that FORS was not just a tick box exercise.

After achieving Bronze the company was unsure that a small organisation would be able to achieve Silver so initially it was the focus to maintain Bronze. At that point we were a single truck operation and it was only after the decision to upgrade and increase the fleet to two trucks did we look into progression.  We did avail of the E learning modules and the CPC course on cycle safety.

“This year has been challenging in a variety of ways. Being a FORS Gold operator I believe sets me apart.  There is a sense of respect and kudos when on site after my accreditation is checked the customer knows I’m a Gold Operator.” – Martin Gibbons Director

Probably the biggest benefit of FORS has been the focus on not just my day to day business but how FORS interlinks with that to improve the business further.  Focus on training, and the benefits that has on safety and overall performance have ulitimately made us a better business that we were before FORS.  I can quantify the improvements through the performance evidence tracker, and flag up any issues quicker.  Certainly by thinking of my recent bronze audit, my “FORS” folder is my business folder.

“That’s great news and congratulations on gaining your Gold, its fantastic to see your commitment to both Tarmac and your business, thank you for pushing forward to Gold status and being the first mixer in the South West and South Wales area to do so.” – Mark Preston Area Transport Manager Tarmac

The main reason for progression was that we wanted to demonstrate to Tarmac who we are as a contractor and that we are capable of meeting the challenges ahead. It is also a great opportunity to demonstrate that my business is one which Tarmac should want to continue in partnership with. FORS is also hugely recognised by the construction sector and certainly by some of the UK’s biggest contractors. It is important that we continue to improve the operation and by doing this we are in a better position to benefit from more work and possible continued expansion in the future.

*Annual improvement in MPG and Incidents per 100,000 Kms

The future in the haulage and construction sector is currently unclear and therefore, we have to ensure that we are best prepared to meet the challenges ahead. Having purchased two Euro VI vehicles in 2016 we are focussing on better performance, continued compliance and better training and communication.  Longer term and subject to viability the need will come to renew vehicles and there will be big decisions to make for the company.  Direct vision is one of the ready mixed concrete industry’s requirements for London to help meet the Mayor’s targets.  Constantly keeping up with what manufacturers developments will help put me in the best position with future decisions.  On award of FORS Gold my personal goal is to improve myself by attending as many courses as possible that will help me be better at my job and manage the business to the best of my ability. Through our FORS progression we have understood the need to continue to develop as so much changes, whether it be legislation or industry standards.  By doing that we are confident we can maintain the standards and continue to fly the flag for FORS.

Gold is a major step for my company – it shows that I’m able to demonstrate that the company is meeting paramount standards. Having Gold FORS logos on my trucks would be an illustration of my achievement but also be a great advertisement for FORS as working on some of the country’s biggest infrastructure projects. It would also show the benefit of achieving FORS accreditation for similar operators.

Please feel free to view my profile on LinkedIn