A W Brooks Haulage Ltd is a small company with one vehicle and two drivers, working opposing shifts on a 24 hour basis. The company is based in Radlett and has two full time drivers, one of them the director of the company. Both drivers have been trained to the highest standards by both Tarmac and FORS alike and undertake to do both FORS e-learning on a yearly basis and FORS Safe Urban Driving, classroom course every five years. 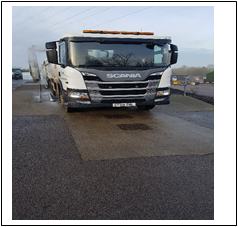 The company work exclusively for Tarmac and are engaged in taking away plainings on behalf of Tarmac as well as hauling aggregates on behalf of them during both the daytime and night and enjoy working on such contracts as TfL and CVU.

The company were asked by Tarmac to do their FORS Bronze in 2015 as part of the commitment to Tarmac and the company soon saw the benefits of FORS which promotes, to achieve safer vehicles and drivers, alongside robust policies.

The benefits of joining the FORS became evident as its clearly promotes safety which is one of Tarmac’s underpinning rules for both driver and vehicle. The company saw that these were standards and ethos that they wished to adopt for improving the safety for both our vehicles and drivers.

As Gold Members who take safety very seriously, in 2018 we brought our latest vehicle, which is at the Euro 6 standard as well as being N3 lower entry cab. The vehicle has full FORS safety equipment, along with collision manager, lane deviation warning and overhead power cable detectors which makes for a safer driver and a more comfortable driver ride, thus making the driver a less stressed and a safer, more comfortable driver. Both drivers have undertaken FORS training, both classroom based and e-learning based, (E-learning every year and Safe Urban Driving every 5 years) and the company is proud to say that our accident rate remains at zero accidents for the fifth year running.

We are proud to have achieved our gold status in 2017 and this has meant that Tarmac see us as one of their premium partners within its extensive network of owner drivers.

As said earlier, the vehicle is equipped to above the FORS required specs, and our adblue vehicle is at Euro 6 standard, thus making for a more economical vehicle and a safer vehicle, with a better impact upon the environment. This is our 1st adblue vehicle and the company have seen subsutural savings in fuel this year.

FORS has helped the company benefit through their driver training programme, both classroom based and through e-Learning modules, and the regular toolbox talks prove to invaluable to both drivers in raising their awareness of both road safety and the environment.

The company are progressive towards improving the environment, in that where possible we encourage the driver to take, whenever possible public transport or car share. Although only a small company with only two drivers, one being the director of the company, any meetings with the company are carried out by telephone conference wherever possible, so as to not pollute the environment with traffic, along with practical reasons. I believe this makes a difference to the environment, even thou we are a small company which has few meetings and both drivers that work alternative shift patterns.

“All environmental issues are taken seriously within the company.” – Anthony Brooks, Director.

My vehicle is fitted with the latest 360 degree recordable cameras, near side proximity sensors and audible left turn alarms, Class IV,V, V1 Mirrors, Anti-collision manager, Lane Deviation, Overhead power cable detectors and flashing beacons on the cab of the vehicle, cyclist safety stickers to both the rear and sides of the vehicle. The vehicle is also fitted with an N3 chassis (Low entry Cabs).

Although A W Brooks Haulage Ltd is a small company which has very little need to employ more drivers, we have continued to implemented a recruitment policy that outlines that we need to look at employing younger drivers/employees and provide training to that particular role, should the need arise.

“Road Safety is important to me and FORS along with Tarmac are proud to have both on board.” – Anthony Brooks, Director

We have learnt that by equipping the vehicle and both our drivers to the highest safety standards that our accident rate has remained at zero over the past five years and has saved both time and money in reduced claims to the company.

Achieving Gold Accreditation will help me to continue to strive towards the highest road safety standards and that we are able to continue to maintain this safety record and protect the environment.

This year we have seen a increase in our average MPG. I feel is may be down hauling heaver and differing loads this year due to last year. The company have now brought a Euro 6 vehicle and have educated me and my other driver in eco fuel economy and it is hoped that next year I will see an improvement in the fuel figures. 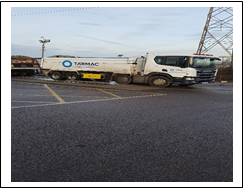 Both me and my other driver are required to fill in an in-depth medical declaration on an annual basis even though through the FORS Standards it is recommended every 5 years. It is mentioned in the driver’s handbook, which requires the drivers to report any change to the company and forms part of their contract of employment.

The future plans of the company are to ensure we that our safety record continues to be to the highest standard, through driver training and fitment of vehicle safety equipment, while promoting the best use of vehicles so as to protect the environment in line with Tarmac policies.

Maintaining our Gold accreditation will help to keep the company to maintain these goals and help to improve our industry’s safety standards, whilst looking towards reducing our emissions through less polluting vehicles.