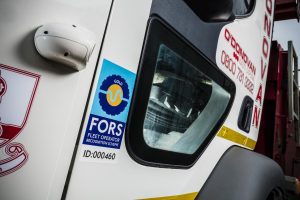 FORS, the Fleet Operator Recognition Scheme, has announced it is to reduce the period between mandatory FORS Bronze re-approval audits from three down to two years for Gold accredited members from 1 January 2018.

The move to reduce the time period between Bronze re-approval audits was announced to delegates at the recent FORS Members’ Conference in Solihull, and will be implemented from 1 January 2018. From this date the change will affect members applying for Gold for the first time, and to existing Gold members as and when their current Bronze accreditation expires. The decision was taken by the FORS Executive Group (part of GSAG, the scheme’s Governance of Standards Advisory Group), after it deemed a three-year period between on-site audits was, it said, ‘simply too long’.

FORS also revealed that the current Gold evidencing fee of £235 will be scrapped for smaller operators (those operating one to three vehicles). The axing of the fee is also effective from 1 January 2018 and is aimed at encouraging smaller operators to progress to FORS Gold and, with it, go on to attain the very highest standards of operational best practice.

Anne Johnson, FORS Operations Director, said, “After reviewing the details of the accreditation process, the FORS Executive Group felt a three-year gap between FORS Bronze audits was simply too long. The change,” she said, “will ensure high levels of safety, efficiency and environmental protection are better maintained and evidenced.

“The decision to scrap the evidencing fee for smaller operators,” she added, “will be a welcome saving for many and we anticipate the move will provide an incentive for more smaller operators to progress through to FORS Gold status and to enjoy the many benefits that exemplary levels of best practice can bring.”